Thursday's post-con class in Unconventional Mixed Media With Encaustic was a bit wilder and more rambunctious than Wednesday's class. Besides Joanne, students included Cherie Mittenthal, Binnie Birstein, Lynette Haggard and other friends, as you will see below, and of course it was a real pleasure (and challenge) to have them take my workshop. 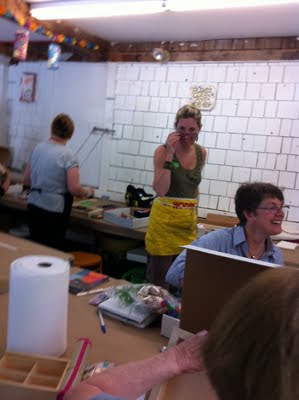 The process was the same for this group of students as it was the day before. This class, however, wanted to work in multiples, so several people made more than one work. 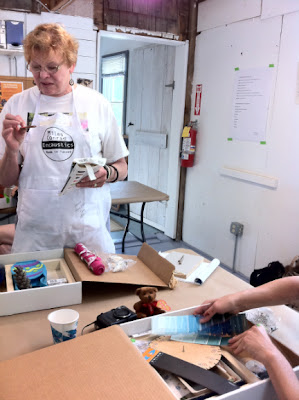 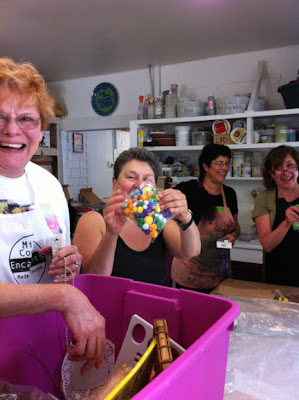 There was a lot of laughter and everyone seemed to be having a great time.

Now on to the work:

Apparently I missed taking a photo of Donna Talman's work by itself, but it's the piece right beside her with the rust-colored top. She also did a second one which I neglected to photo as well. Sorry, Donna!


This class also found that knowing when to stop adding elements and undercutting the focal point of the work was the most difficult part of this process. Deciding what was important in terms of meaning or intention and then emphasizing or building around that concept visually was the stumbling block for most people. It seems that it's very easy to get distracted by falling in love with particular objects and wanting to add them in. In my conversations with people during the construction process, I tried to emphasize the importance of leaving areas of the work uncluttered and spatially open.

The other main problem, I would say, is being too literal with meaning so that the work becomes more an illustration of a statement or theme rather than an aesthetic composition. This can be a fine line to walk but usually resorting to formal components of visual organization can assist the process.

Thank you to all the Thursday students for a great day of art making and laughter!

These post-con classes were a wonderful experience for me and an opportunity to test some ideas about how to assist students in creating mixed media works with encaustic. Thanks so much to Joanne and Cherie for the opportunity to put my theories into practice.
Posted by Nancy Natale at 12:00 PM