On Wednesday, June 8th, and Thursday, June 9th, students in the all-day workshops on Making Fine Art With Unconventional Mixed Media and Encaustic worked with the mystery boxes and other materials I provided to make works of art. The idea was that the Art of Bricolage blog would provide some insight into the process of combining found objects with encaustic and prepare students for the process.


First, there was the anticipation of opening the mystery boxes to see what they contained. I told the students that there was much more in the boxes than they could ever use in one work on the 9" x 12" panels I provided. In addition to the contents of the boxes, there was a selection of other materials to use such as paper, fabric, colored Evans encaustic gesso, pigment sticks, oil pastels, watercolors, string, wire, thread, and who knows what-all. There were eight prepared colors of R&F encaustic paints plus a large pot of clear medium.


Before we began, I read a list of the five steps I thought they would have to use in the process:

1) Examine contents and think about alternative ways they could be used and/or transformed
2) Edit - review the materials in the mystery box, rejecting some and selecting others
3) Make a provisional composition - lay out elements on the panel to see how they could work together
4) Plan construction sequence - decide what to do about the panel itself and in which order the elements should be assembled. Remember that once you use wax, you will not be able to glue.
5) Execute plan - you can improvise and change as you go.

That sounds simple enough, but I don't know anyone who would actually be able to stick to as simplistic a list as that. In actuality, artists seemed to make several provisional compositions as they tried out a scheme and became familiar with the elements. In the end they may have rejected everything they started with in favor of all new things. This was not an easy process - as we all learned. 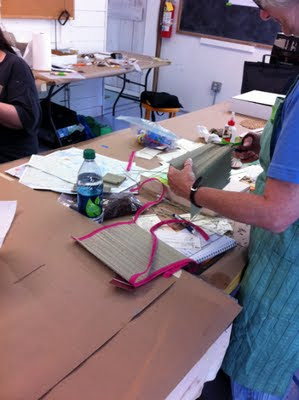 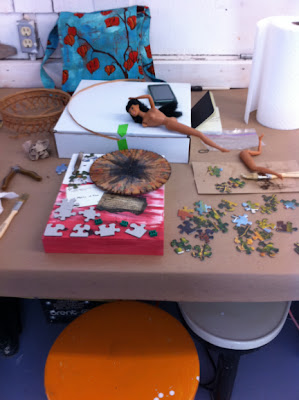 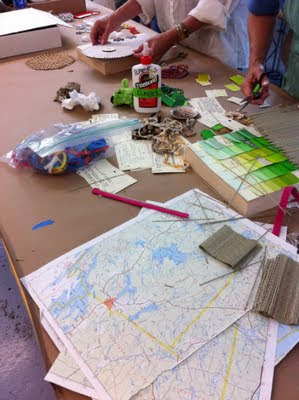 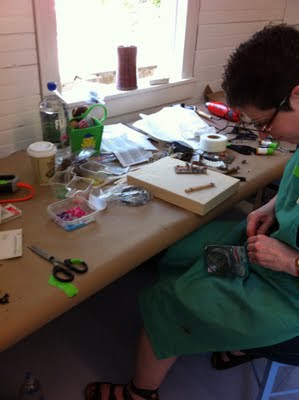 Before the boxes were opened, I also asked the students to write a two-sentence statement as they worked on their piece. One sentence was to be about the physical construction and the second about their meaning or intention for the work. The plan was to stop working by 2:45 p.m., hang up all the work, rearrange it into the semblance of a show and then have each person stand by their work and present it to the class with their statement about it. After everyone had a turn, we had a group discussion of the process and what we had learned about working this way.

Here are the students and their works (not the world's greatest photography but you can get a sense of what they made):


I was very pleased to see the quality of this work. The most important factor for most people was knowing when to stop. The temptation was to keep adding elements just because they were available and putting on the brakes was hard to do.

Thank you to everyone who participated in this class. I had a great time and I hope you did, too!
Posted by Nancy Natale at 7:54 PM