"Gobsmacked!" is the title of the exhibition currently showing until October 5th at the beautiful new Odetta Gallery, 229 Cook Street, Brooklyn. This show features large, rich charcoal drawings depicting visions of psychological topographies by Charlotte Schulz and bricolage works by Margaret Roleke. Both artists create work that addresses the political and cultural state of the world without being didactic or conveying a directly gobsmacked attitude at the horrors and inequities of life on planet earth.


Margaret Roleke's work certainly fits the definition of "bricolage," and she achieves a considerable amount of dimension in some of her wall works by using plastic objects such as palm trees, buildings and animals that protrude off the panel. Most of Roleke's works in "Gobsmacked!" are painted a single unifying color that brings together such disparate plastic toys as horses, wagon wheels, soldiers, spacemen, cowboys, guns, rocket ships, houses, canoes and canons - to name just a few.


Roleke wants to emphasize the difference between "girl toys" and "boy toys" by challenging the genderized assumptions we give to the toys themselves as well as by applying the "girl color" of pink to cowboys, Indians, horses and Western what-alls that are assumed to be playthings for boys.

I thought that Margaret Roleke made effective use of the materials she chose and coating the plastic toys with paint in one color subdued their plasticity with a reductive palette. In a way, however, there is something about the garish colors common to so many in toys that makes the toys uniquely other worldly and sets them apart from other plastic objects. These gaudy colors are thought to be attractive to children and to their parents. There is also the distinctive processed petroleum odor emanating from so much plastic in a confined area. You will get a whiff of this if you go near a toy department at Target or some other store and you will know the Girl Aisle by that garish plastic pink that falls somewhere between magenta and hell.


Toys on a Disney Image
Another panel work, "Tink's Army," uses plastic soldiers mounted on  fabric that portrays a Disney character - Tinker Bell in this case - looking almost like a world map at first glance. I liked the way the arrangement of military toys distorted and almost hid the figure underneath. 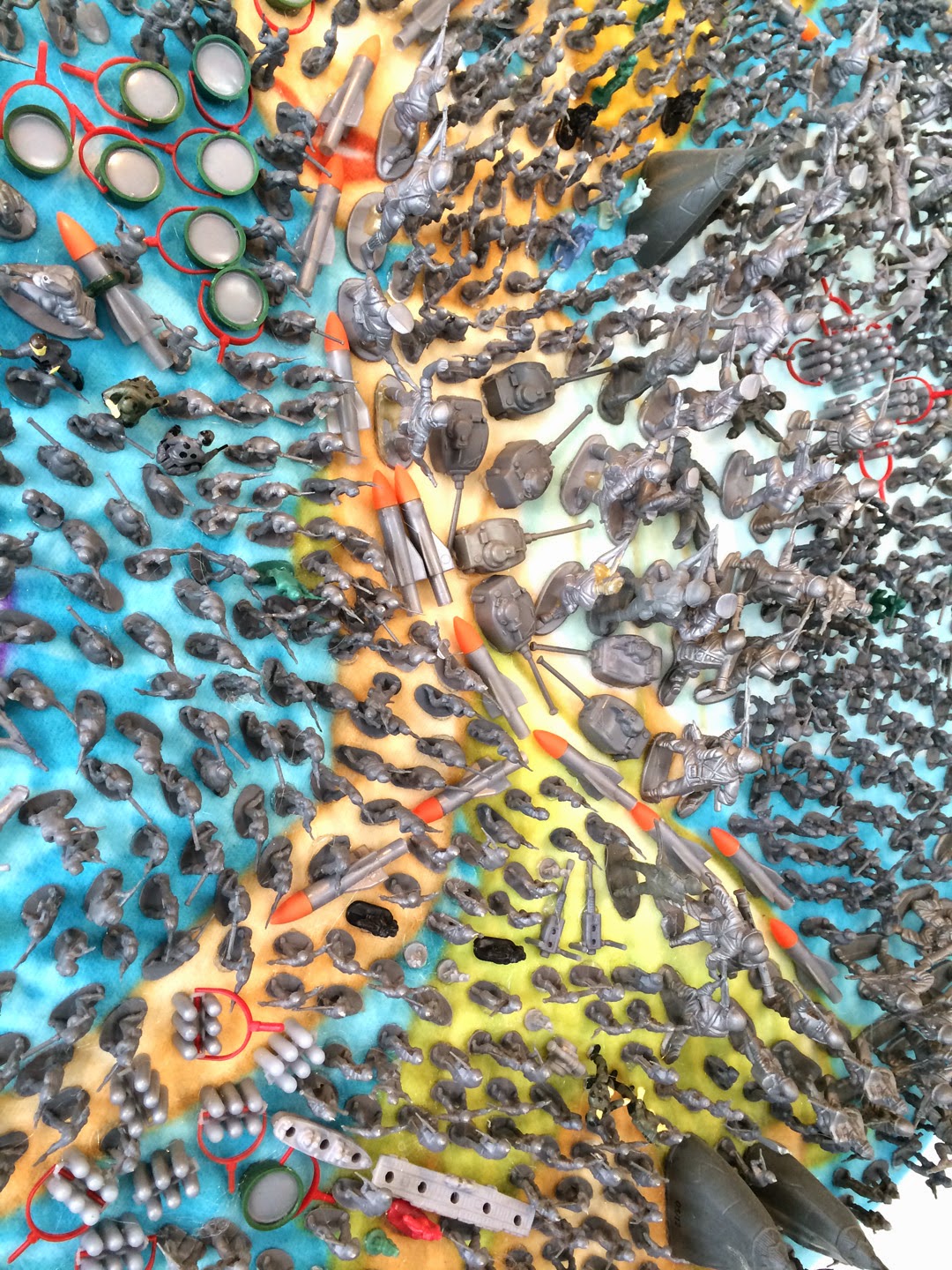 Of course the idea of sweet, voiceless little Tinker Bell having an army is an idea that jars the mind. Roleke wants to point out that the the vision of this little fairy wearing an ultra-short dress and acting coquettish (or what Disney describes as "Sassy, Fashionable and Creative,") is a sexualized vision thought to be an acceptable character for children. Are we willing to accept the flirtatious Tinker Bell and not the war-mongering one? Does war belong to boys and fashion to girls?


Black Barbie, Black Guns
The color black (an all time favorite of mine) carries its own tone or connotation - not of gender, but of meaning and associations - mourning, fashion, absence, threat, foreboding. In the center of Odetta Gallery is a spiderish hanging work by Roleke painted a dense matte black. Only when you view it closely can you distinguish its various components: guns, soldiers and Barbies - many of the Barbies separated from their heads. 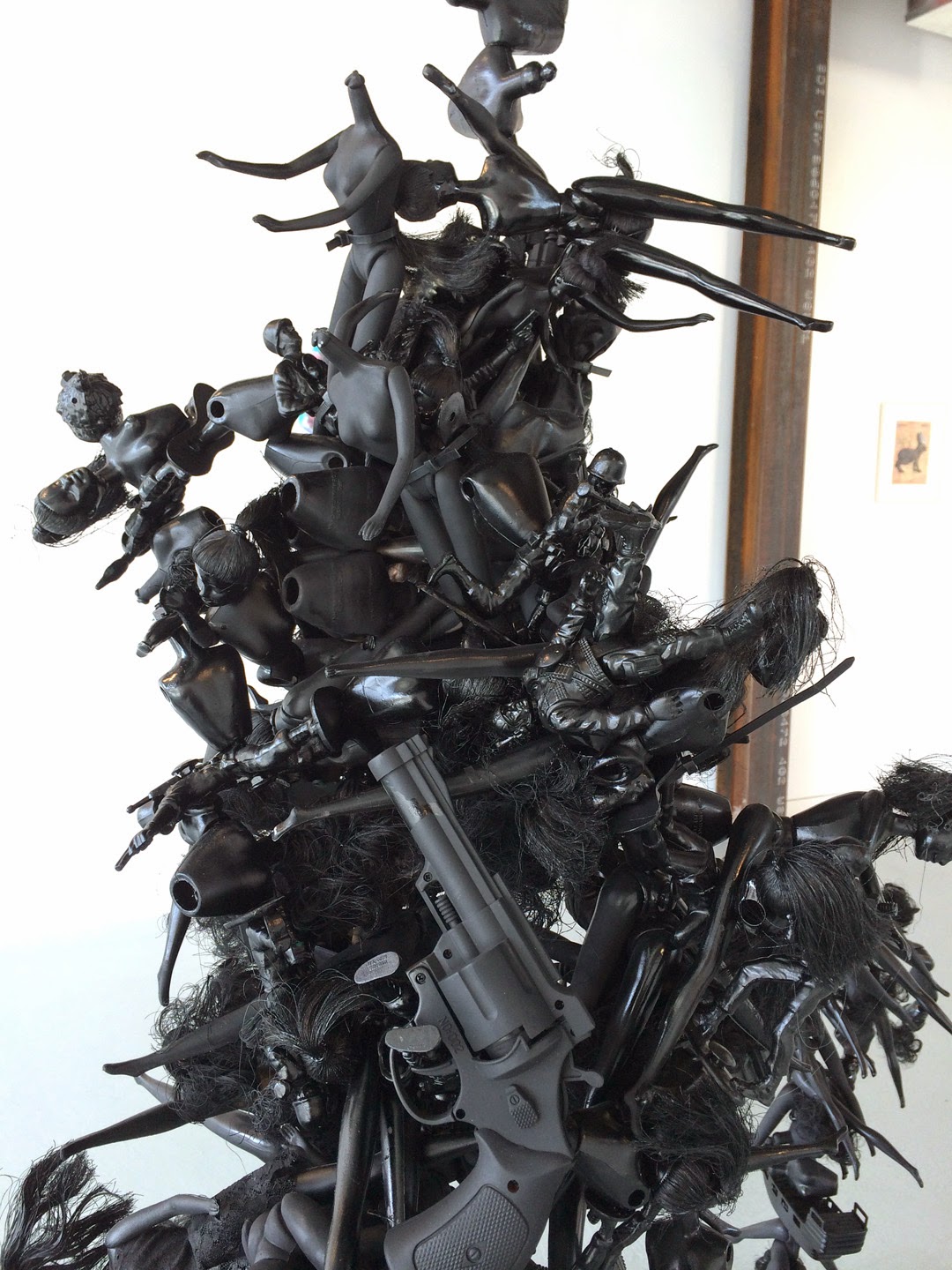 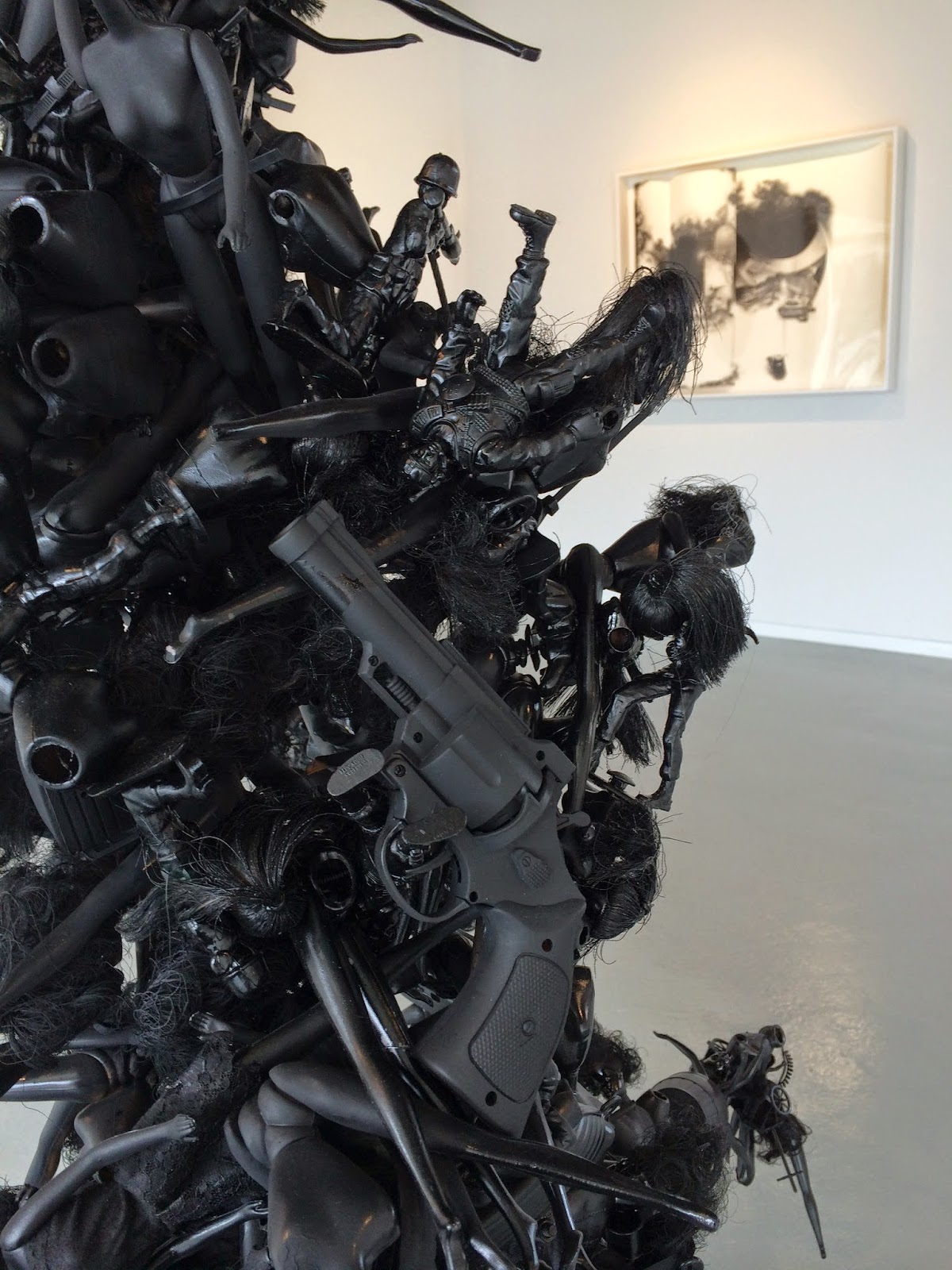 Here Roleke co-mingles girl toys and boy toys, uniting them in a fashionable but mournful coat of dense black. This strange combination of headless Barbies (with plenty of unattached hairy heads), guns, and soldiers all suspended in the gallery's center makes me think about what we give children to play with and how this forms their vision of male-female relationships and human interaction. Kind of a ghastly thought that we are perpetuating the sex and guns culture now destroying the world in various ways. All we need to add to this mix is some cold, hard cash to really portray adult reality.


Chinese firecrackers
What looked to me  at a distance like strings of Chinese firecrackers turned out to be colorful plastic shotgun shell casings. Who knew that bullets came packaged so attractively? Roleke has wired empty casings together in long, bead-like strings, and they are hung on the wall at Odetta in a mass reminiscent of Mardi Gras beads or Anatsui's metallic hangings.

That these bullet castoffs carry printed names such as "Top Gun" attests to the cultural messaging inherent in our gun-happy culture. You, too, can be Tom Cruise in an elite group of expert marksmen if you use the right brand of ammunition when you are plugging away at a target, a live animal or who knows what or whom. This is branding at its finest.


Odetta Gallery
Finding such a beautiful, Chelsea-ish storefront gallery in the midst of grungy Bushwick is a lovely surprise.  Created and operated by artist Ellen Hackl Fagan, Odetta is a new gallery that plans to show contemporary works "focusing on Color Theory, Minimalism, Glyphs, Buddha Mind, Fluxus, History, Humor, Psychedelia, Ephemera, Science, Math and Music." Be sure to visit!