Bricolage All Around Me

Do artists see differently than other people? I think they do, and I think it's because they have trained their eyes to zero in on particular elements in their surroundings to replicate the focus they use in creating their work. So, a portrait painter may be attracted by the way light strikes the side of someone's face, sculptors may see a form in nature that leads to a new work, and abstract artists may be fascinated by the arrangement of windows on a building or a particular color. Personally, I see bricolage. (not dead people).

James Kitchen
So I'm walking by the courthouse in Northampton the other afternoon and out front on the lawn is not the Civil War cannon you might expect but a "cannon" made by Chesterfield sculptor James Kitchen from found metal pieces. I have seen Kitchen's work before and have been impressed with his skill in combining the pieces into works that look cohesively like sculpture rather than a pile of metal parts put together. (Be sure to click pix to enlarge.)

Kitchen was not trained as an artist and makes these sculptures as an avocation, although one to which he devotes a lot of time and thought. He often shows his work around the Pioneer Valley in western Massachusetts and his works range from sort of petite to the fairly monumental in scale. You can read more about him here. He has a great eye and has apparently developed his expertise through experience. I believe that he also unifies his work by applying a patina so that all the pieces are brought together by color. 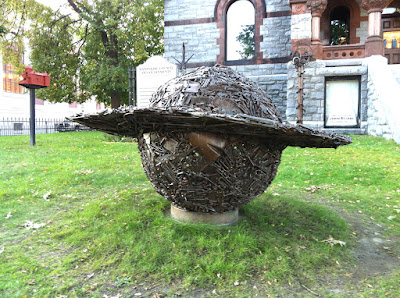 (Unfortunately, I don't have the titles of these works and did not see them on Kitchen's website.)

OK, I'm Defensive About My Cluelessness
The reason I bring up this business of how artists see is that I'm a little sensitive about what I personally see as I move through the world. I have had the experience of not realizing, until it was pointed out to me by someone close to me (guess who?), that a guy I had seen and spoken to at the studio for a few months had a full beard. I hadn't even logged it in as being part of his face. Why? Don't know. Does not compute. I also have the bad habit of just looking at the expressions on people's faces and not at their clothing, new shoes or the fact that they are missing a limb. (This really happened yesterday, although in my defense I only saw this person from the side and back, not the front. Would I have noticed if I saw all of her? Only if I had really looked, I guess, and I was occupied with something else.)

Anyway, I'm blaming my lack of observation on the fact that as my eyes range through the world, I notice things differently than other people. Now wouldn't it be dull if we all saw the same things?

Sally Curcio
I did happen to notice the work of another artist out here in western Massachusetts whose work could be classified as bricolage. That artist is Sally Curcio. I have seen her work in a couple of shows and wouldn't have pegged it as bricolage until I started thinking about bricolage as a particular form. I was reading in the Northampton newspaper about a show she was in and the description of a particular work rang the bricolage BOING bell in my mind. When I went to her website, I discovered that she made lots of work using found materials. Unlike most bricolage, her work has a rather Minimalist aesthetic that is very elegant and streamlined as well as understatedly humorous- so take a look.

You see that I'm relating to my previous concentration in this blog on that American icon, Barbie. Although one might be hard pressed to identify the specifically Barbie arms in this diptych.

The next image contains elements that should also be familiar to many readers of this blog.


Next two pieces having to do with eyes:


And finally a piece that relates to work by one of my heroes, El Anatsui.

Curcio had a  statement on the page with her Bottle Caps piece that delves into some of the reasons for using found objects. I have some disagreements with her statement, but I'll tell you about them after you read what she had to say:

The installation “Bottle Caps” consists of over 1400 bottle caps that were collected from friends, anonymous donations, my trash, and from visits to the recycling center. The bottle caps are glued to a 6’ x 10’ array of panels.

After their short functional life, bottle caps become garbage. This work resurrects these throw-aways as an artistic medium. The work engages in the most basic and powerful trick of magic and religion: transubstantiation.

This assemblage attempts to evoke our innate fascination with categorizing and collecting, and our bent to be connoisseurs. This collection comically summons this impulse into action. The works offers, in a self-consciously naïve way, the self-satisfaction of collecting a “complete” or “large” set of objects, and the need for recognition in publicly displaying this triumph. The process of collecting, organizing, and display is a ritual that attempts to create an oasis of certainty, order, and self-identity.

This composition deliberately confronts the observer with a kind of alien and obsessive attention to precision and order suggesting an unconscious urgency. This translates positively into art that evokes the simplicity and “cleanness” of minimalism, the brightness of op art, and the innocence of folk art. The sundry shapes and patterns are simple and satisfying, the colors are bright, the format neat, and the materials familiar and everyday, albeit re-contextualized. With this work I try to speak to our perpetual drive to somehow, in some way, perhaps even in an outlandish way, try take control and make sense of things.     Sally Curcio (from her website)
Although I agree with much of what she says, I think that in her second paragraph describes what the real task of an artist is in making a bricolage work. She calls it "transubstantiation," but that seems to be a term used exclusively by Roman Catholics to describe the conversion of bread and wine into the body and blood of Christ.

I believe what she's talking about is transformation, the transformation of found, readymade, recycled or invented elements into a work of art. I don't mean to be critical, but I don't think the rest of her statement really gets at what using found objects brings to a bricolage work, and actually seems to rationalize why she uses the found objects. I think no excuses need to be made for using found objects because those objects have an identity which is subsumed into the bricolage work and which enriches the new work. Suppressing the individual identities of the objects is the goal of the bricolage work. So it's like having your cake and eating it too. You see the work as something new but if you focus on the parts, you see the old. You might just call it having bricolage eyes.
Posted by Nancy Natale at 10:41 PM