In my initial post I spoke about the difference--as I defined it--between bricolage and assemblage. Assemblage is the bringing together of various objects or pieces of materials as they are found, without much changing or manipulating of them. In this way, they retain their distinct identity as separate pieces although they become part of the whole.

I think the above work by Betye Saar is a good example of assemblage. You can see that she has brought together an old chair, washboard and cage together with other elements placed inside the cage. I see no evidence of paint or other manipulation of any of the parts. It looks like the pieces were incorporated into the work as she found them.

This work makes me very aware of the uniqueness of each of the objects and I wonder where they came from. That is, does Betye Saar go to flea markets or antique stores, does she have pickers working for her and so on. I think about the source of these elements because they appear to have survived over time and are more self-referential than otherwise. As I looked at the work, I understood that the combination of parts alluded to black slavery and got the evocative feel of the elements, but for me the work lacked the unique hand of the artist in its making. I thought the emphasis was more on the "found" than the "art."

The Liberation of Jemima is probably Betye Saar's most famous work. Her intention was to "transform a negative, demeaning figure into a positive, empowered woman..., a warrior ready to combat servitude and racism." (quote from Betye Saar). Here Saar has not just assembled found objects but transformed them by painting and attaching them to each other. She has made a Black Power fist from wood or some other painted material and set it in front of the found print of a black "mammy" with white infant. She has probably painted a found doll and painted found syrup labels, then set all the elements into a painted shadow box with fluffs of cotton in the foreground. This is a unified work that clearly speaks its meaning: Jemima has given up her broom for a gun and raised her fist in a Black Power salute. I would define this as bricolage.

Leonardo Drew is one of my favorite artists, as you may know from Art in the Studio. I saw this work in person at the DeCordova last September. It is choc full of found objects that have been assembled in a grid and painted with rust. What brings together the disparate shapes of the objects is the regularity of the small square blocks within each of the larger squares. This is grid upon grid organization. When the objects break the grid format because of their size and shape, the viewer's eye snaps right back to the grid with the appearance of the next block. Painting just about everything with rust has the effect of pushing everything back, toning it down so that it loses some of its original color and becomes part of the whole. That also gives it more of an old, decayed look. I would define this as bricolage.
When you see a collection of objects like this, is there any question about the meaning of it all?

This is a lovely little piece, maybe 2' by 2' or so. Here is a broken grid that still reads as a total grid, but look at how many ways he has disturbed the regularity of the format.
Suppose you had a series of objects, not all the same shape and/or size, but a few the same, and you brought them together on a panel with a similar organization. Perhaps you would overlap other objects on some of them as Drew has done with things inside the little boxes. Inside=3D and Overlap=2D if you see what I mean. You could unify all the objects by painting them a similar color or colors, maybe hot pink or blue instead of rust. You would be manipulating the elements. You would be making bricolage.
Do I have to think about meaning?, you might ask. You will find your meaning from the objects, I would answer.


People who are not used to making art mostly tend to make animals, robots or doll scenarios from found objects. This is part of the folk art tradition, but this is not what we are aiming for.

Examples of bricolage from current exhibitions in New York galleries

While it may be stretching it to claim that some of these works are bricolage, look at the way she uses fabric to look like paint. The fabric elements of her compositions have certainly been manipulated, and compositions such as these would easily translate into more dimensional materials. Note the simplicity and clarity of her compositions, the balance between figure and ground and the breathing space in her work.

Addendum: By the way, I read on Altoon Sultan's blog that Bourgeois "found" these fabrics in her own closets, cutting them from clothing and household items. Read the excellent post about the show and see the more intimate photos of the show taken in person.


The last one is my personal favorite, probably because it has something African-looking about it.


By the way, if you Google "bricolage," you will get a lot of things in French, such as: 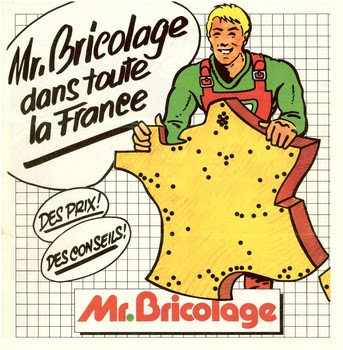 This is because the word "bricolage" is apparently used in French to mean "do-it-yourself."

Next and last post before the conference: the wrap up, with emphasis on color, space, line, value, form and the rest of the components to consider in making fine art.